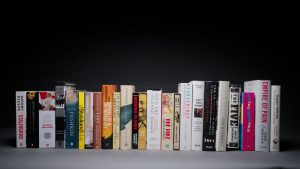 We are set to celebrate our 25th anniversary by holding a Winner of Winners Award to recognise the outstanding work of the previous 24 prizewinners. This special one-off award will crown the best work of non-fiction from the last 25 years of the prize.

Together they will select a shortlist from the 24 previous winners of the prize (announced on 9 March), before choosing an overall winner. The winner will be announced on 27 April at an event held at the National Museum of Scotland in Edinburgh.

The anniversary will also be marked by a one-off documentary – All The Best Stories Are True – which explores the very best in non-fiction writing over the past 25 years. From nail-biting moments to life changing stories, the documentary uncovers how the prize started out as the non-fiction rival to the Booker, and what the next 25 years hold for readers and writers in a world now steeped in ‘fake news’. It will be available to watch on the Baillie Gifford Prize YouTube this February.

In addition to this, Waterstones will be celebrating the 25th anniversary with displays of all 24 previous winners, paying tribute to the Baillie Gifford Prize’s history and influence as the biggest UK-based non-fiction book prize.