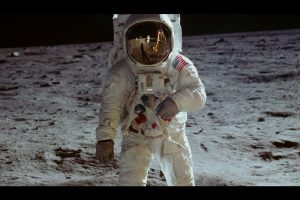 50 years ago, on July 20th 1969, Neil Armstrong and Buzz Aldrin were the first people to set foot on the moon. A new film documentary, Apollo 11, charts that historic event using unseen archive footage and some of the 11,000 hours of uncatalogued audio recordings. The film’s director Todd Douglas Miller discusses the challenge of bringing NASA’s monumental achievement to the big screen. We conclude our exploration of LGBT literature marking today’s 50th anniversary of the Stonewall Riots. The events of 28th June 1969 were a key moment in the birth of the gay rights movement. Dr Erica Gillingham, Bookseller at London’s ‘Gay’s the Word’ bookshop and specialist in LGBT young adult fiction guides us through titles from the last decade. It’s been a big week for memes with Boris Johnson’s image being transposed to the Titanic and an Ikea catalogue. Louis Wise unpicks what makes the best ones so successful and consider what memes tell us about the zeitgeist, how memes act as instant feedback on TV, film or music videos, and how far memes undermine, or proliferate, celebrity culture.

FT Life and Arts: What to wear at work – the new rules