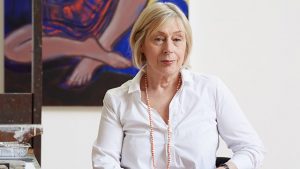 Eileen Cooper is a painter and printmaker who’s been quietly creating boldly coloured figurative images and ceramics since the 1970s. This year finally sees the first major review of her work which, in magic realist style, encompasses huge themes: sexuality, motherhood, life and death. The show is called Parallel Lines: Eileen Cooper And Leicester’s Art Collection, and places Cooper’s work next to that of LS Lowry, Pablo Picasso, and Paula Rego, among others. Eileen Cooper talks about her life, work and role as Keeper of the Royal Academy Schools – the first woman to hold the prestigious post.

The Grand Opera House in Belfast is celebrating the return of Northern Ireland Opera to its stage, following a £12 million restoration of the historic building. The company has chosen La Traviata for its homecoming performance, with Australian soprano Siobhan Stagg in the lead role. The BBC’s Kathy Clugston went to the Grand Opera House to find out about their production of one of the world’s most popular operas.

As Ireland introduces its ground-breaking new Basic Income For The Arts pilot, we speak to Angela Dorgan, Chair of the National Campaign For The Arts in Ireland, which has long campaigned for a basic income scheme.

And poet Roger McGough joins us to shares his new poem written in tribute to Her Majesty Queen Elizabeth II.

The Guardian: The Booker Shortlist