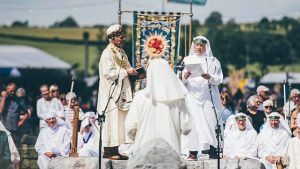 In 1965 the jury recommended that the Pulitzer Prize for Music should be awarded to the jazz composer and band-leader Duke Ellington. But he did not receive the honour. The music historian Ted Gioia has started a petition calling for him to receive it posthumously now.

Carolina Eyck brings the eight seasons of Lapland’s Sami people to the Proms, courtesy of a concerto written for her and her instrument – the theremin. She talks to Shahidha about the joy of playing a musical instrument that has fascinated audiences since its creation just over a century ago and that she plays with just the movement of her hands in the air.