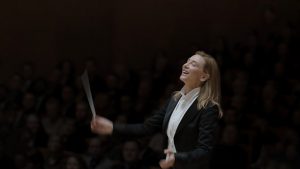 Tár is a psychological drama about an imaginary conductor, Lydia Tár, which has already made waves both for its central performance by Cate Blanchett and for its striking, sometimes dreamlike story about the abuses of power. It is tipped for awards and Cate Blanchett has already won the Golden Globe for her performance. The writer and director, Todd Field, joins Front Row.

The news that the celebrated opera company Glyndebourne has cancelled its national tour for 2023, due to the recent cut to its Arts Council funding, was received as the latest bombshell on the UK’s opera landscape. Glyndebourne’s artistic director, Stephen Langridge, and the music writer and critic Norman Lebrecht discuss the company’s decision and explore what kind of support and vision opera in the UK needs.

Jyoti Patel on winning musician Stormzy’s Merky Books New Writer’s Prize in 2021 and now making her debut as novelist with her book, The Things We Have Lost.

Continuing Front Row’s look at the shortlist for this year’s TS Eliot Prize For Poetry, today Anthony Joseph reads from his collection Sonnets For Albert – poems exploring being the Trinidad-born son of a mostly-absent father. The poem is called El Socorro.