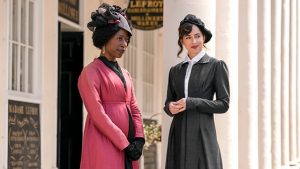 The new film Persuasion based on Jane Austen’s novel starring Dakota Johnson and directed by Carrie Cracknell has already attracted a lot of attention for its blend of 21st century millennial dialogue and Austen’s own words. And Peter Morgan, writer of The Crown, returns to the stage for his new play Patriots which looks at the rise of the oligarchs in Russia, in particular Boris Berezovsky, played by Tom Hollander, helping to secure the rise of Putin, played by Will Keen. Guardian foreign correspondent Luke Harding and film critic Hanna Flint join Shahidha to review both.

Durham’s International Brass festival, which has been going for more than 20 years, is showcasing bands from as far afield as Cuba, Italy and Ghana. Among this year’s high profile artists taking part are Mercury Prize and Brit Award nominees, a MOBO-winning CBBC star, and an avant garde rock band fronted by the Poet Laureate. The BBC’s Sharuna Sagar went to Durham to see how this traditional style of music is being embraced by new generation of musicians and collaborators.

We hear who has been named Art Fund Museum of the Year, and speak to the winner just minutes after it is announced.