Playmobil the Movie, Martyn Brabbins Enigma Variations at the Proms and the Art of Calligraphy

Playmobil: The Movie, Martyn Brabbins and the Enigma Variations at The Proms and the Art of Calligraphy 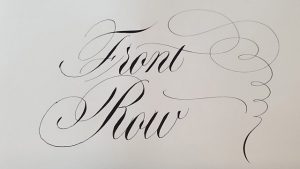 Martyn Brabbins, the Music Director of English National Opera, is turning 60 next week and to celebrate he’ll be conducting a new take on Elgar’s Enigma Variations at the Royal Albert Hall. He discusses the mystery theme to the original version and the importance of cultural exchange with international musicians. Playmobil: The Movie is the next in the long line of toys-to-screen animated films. Daniel Radcliffe, Anya Taylor-Joy and Meghan Trainor lend their voices to the film where two orphaned children find themselves magically transported into a Playmobil world from their imaginations. BBC Radio 6 Music film critic Rhianna Dhillon reviews. Scribe Paul Antonio discusses historic and contemporary calligraphy – from laws intricately and elegantly written on vellum and signed by the Queen to high-end fashion events – and offers Shahidha some handy tips for the perfect Copperplate script.