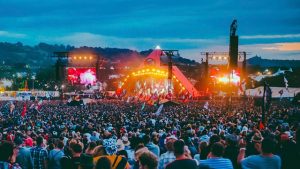 Critic Ben East and academic Catherine Love review Rock, Paper, Scissors, a trilogy of plays written by Chris Bush to mark the 50th anniversary of Sheffield Theatres and A Film About Studio Electrophonique, a documentary about Ken Patten’s influential home studio in Sheffield.

The three separate but interlinking plays will be performed simultaneously on the three stages of the Sheffield Theatres complex – Rock at the Crucible, Paper at the Lyceum and Scissors at Studio.

A Film About Studio Electrophonique premieres this week at Sheffield DocFest. The documentary shines a loving spotlight on Ken Patten who built a recording studio in his council home in Sheffield and through his recording and mixing skills provided the launchpad for Pulp, ABC, Human League and many other burgeoning musicians in the steel city.

The People’s History Museum has been shortlisted for this year’s Art Fund Museum of the Year prize. It was the Migration: a human story project which wove stories of contemporary and historic migration into the museum’s existing collection that caught the judges’ attention. Dr John Gallagher, associate professor of Early Modern History at Leeds University, went to visit the museum for Front Row.

Saturday marks 75 years since The Diary of Anne Frank was published. Poet, writer and broadcaster Michael Rosen has written a sonnet to commemorate this and he joins Front Row to give the first public reading and discuss the enduring significance of Anne Frank’s book.