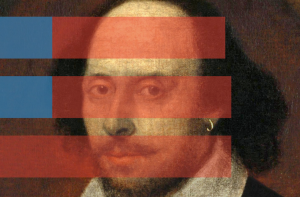 William Shakespeare’s position as England’s national poet is unquestioned. But his plays have also held an essential place in American culture for over 200 years. Americans of all stripes — presidents and activists, writers and soldiers — have turned to Shakespeare to explore the nation’s fault lines and have found the darkest nightmares of its past – tyranny, assassination and battles over same-sex love, cross-dressing and interracial marriage – played out in his most celebrated works.

In this special event James Shapiro, the leading American Shakespeare scholar, was joined by a cast of distinguished actors, Chukwudi Iwuji, Harriet Walter and Samuel West, to bring to life the themes of Shapiro’s recent book, Shakespeare in a Divided America. We encountered John Quincy Adams, the abolitionist president, who nonetheless could not conceal his dismay at Desdemona’s interracial marriage to Othello; Abraham Lincoln and his assassin John Wilkes Booth, both obsessed by Shakespeare’s tragic heroes; and most tumultuously of all, we revisited the notorious 2017 production of Julius Caesar in Central Park, when a Donald Trump look-alike in the role of Caesar was assassinated nightly to howls of outrage from the political right.

Intelligence Squared: Antony Gormley on How Sculpture Shapes the World