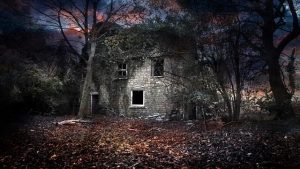 Shahidha Bari’s guests include author Kirsty Logan and former League of Gentlemen writer and performer Jeremy Dyson, whose play Ghost Stories is back in the West End. Joining them is the film critic and author of a novella called Mothlight, Adam Scovell, poet Nisha Ramayya whose work States of the Body produced by Love speaks of goddesses who symbolise all the attributes of women and British Museum curator and expert on ancient Mesopotamian medicine and magic Irving Finkel.

Ghost Stories by Andy Nyman and Jeremy Dyson is running in the West End at the Ambassadors Theatre until Jan 4th.
Kirsty Logan’s new book of horror stories is called Things We Say in the Dark.
Nisha Ramayya’s new collection is called States of the Body produced by Love.
Adam Scovell’s novel is called Mothlight.

George Eliot’s The Mill on the Floss