A dream team’: how the Hay festival will look online 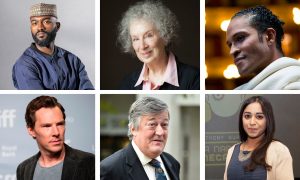 Ian McEwan once joked: “I don’t do research any more, I ask the audience at Hay.” The whole point of Hay festival is the celebratory pleasure of this audience and their dialogue with storytellers sharing big ideas. In the last three weeks we’ve reshaped the programme we’d been planning for the last 18 months into just 80 online events and we’ve been experimenting with tech platforms to keep that conversation going.

I doubt we could ever have assembled the cast who’ll launch our Wordsworth 250 celebrations in real life. Simon Armitage, Margaret Atwood, Benedict Cumberbatch, Tom Hollander, Helen McCrory, Jonathan Pryce, Vanessa Redgrave are a dream team, reading around Shahidha Bari’s jewel-like nano-lectures. Nobel economists Esther Duflo and Paul Krugman can beam in this year as never before, and if we’re in need of a little less conversation of an evening, Royal Ballet superstar Fernando Montaño will be dancing the dying swan for us direct from his studio in LA, Helena Bonham Carter joins Allie Esiri’s Shakespeare show, Inua Ellams updates his magical Evening with an Immigrant for the time of coronavirus, Stephen Fry and Natalie Haynes tell different sides of the story from Troy, and guitarist David Gilmour will be playing a Von Trapped family concert to celebrate Polly Samson’s beautiful novel about Leonard Cohen’s Greek summer A Theatre for Dreamers.

I wish we could all be together in a field in Wales in a fortnight’s time, that you could visit our lovely town’s pubs and bookshops, and that we could party together under the dark skies of the Brecon Beacons National Park. Thousands of Haymakers donated money and sent love to keep us in business, and Baillie Gifford have given us a digital platform. Our glass is way more than half full. Let it rain in May this year. And we might be delivering our first ever carbon-negative gig. And there’s this last, perfect irony. The festival is the very opposite of “social distancing”. It’s all about being together, about contact and exchange. But in that antithesis, there’s another truth that the internet knows at its core: stories and ideas spread virally too, from writer to reader, from that mouth to this ear, and in that reality there is opportunity. Let’s replace infection with inspiration, isolation with connection and let’s open Hay festival to everyone, everywhere. It has never been more important to respond to the world with imagination and hope.