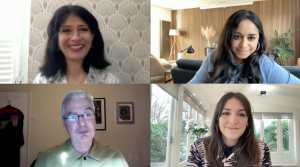 Whether it’s in fashion and music or on our TV and cinema screens, the 90s are well and truly back. Shahidha Bari takes a look at the reasons why. She meets up with Ian Broudie of The Lightning Seeds and his son Riley, who has joined his dad in the band. They discuss 90s nostalgia, playing old and new hits to a Gen Z audience and the continuing popularity of their Euro 96 anthem Three Lions.

In Belfast, costume designer Cathy Prior reveals the inspiration behind the outfits she created for the hit series Derry Girls and provides an insight into her creative process – from combing through old copies of Smash Hits to curating 90s playlists.

To take stock of the 90s and ask what our nostalgia for this decade really means, Shahidha chats to Shaparak Khorsandi, Katy Hessel and Jon Savage. As well as reminiscing about Britpop, girl power and life before ubiquitous smartphones, they discuss the role that art and culture play in shaping the spirit of an age.