You could win a first prize of £3,000 and have your work published in The Observer.

Two runners-up will also receive £500 each.

Entries must be received by 30th November 2019. The winner will be announced at an awards ceremony at the Guardian Media Group headquarters at King’s Place, just round the corner from from London’s King’s Cross.

The prizes are presented by the International Anthony Burgess Foundation and The Observer. See The Observer’s coverage of the Observer / Burgess prize here.

The panel of judges waiting to be inspired by your entry.

This year, our judges are:

Sarah Donaldson, arts editor of The Observer, and

Will Carr, deputy director of the International Anthony Burgess Foundation

Shahidha Bari is an award-winning academic and broadcaster working in the fields of literature, philosophy and art. Born in 1980, she studied at the universities of Cambridge and Cornell. She was the recipient of the Observer Anthony Burgess Prize for Arts Journalism (2015) and one of the first ever BBC Radio 3 New Generation Thinkers (2011). She teaches cultural theory at the University of London and is Fellow of the Forum for Philosophy at the LSE. She is a reviewer for the Financial Times, the Guardian and Frieze among others, and is the Chair of Judges for the 2019 Forward Poetry Prizes. She is a presenter of BBC Radio 3’s Free Thinking and BBC Radio 4’s Front Row. She lives in London. Her book Dressed:The Secret Life of Clothes is published by Jonathan Cape in June 2019. 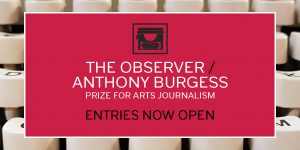