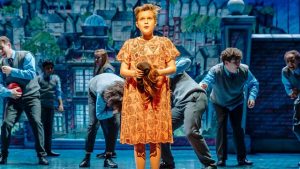 The Boy in the Dress is a major new musical at the RSC in Stratford based on the book by David Walliams, with songs by Robbie Williams and Guy Chambers, a script by Mark Ravenhill and directed by Gregory Doran. With such a pedigree will it match the success of Matilda? Nick Ahad reviews.

The Turner Prize is one of the biggest art prizes in the UK and offers £25,000 to its winner. Front Row goes to the Turner Contemporary in Margate where the Turner Prize exhibition is hosted this year to meet the nominees – Tai Shani, Laurence Abu Hamdan, Oscar Murillo and Helen Cammock – ahead of the winner announcement on the 3rd December.

The Radio 4 Christmas Appeal with St Martin in the Fields will be launched on Sunday 1 December. This year, the fundraising gala at St Martin’s will include a performance of The First Nowell by Vaughan Williams with Radio 4 presenters, featuring a modified libretto by Zeb Soanes. He and Em Marshall-Luck, Founder-Director of The English Music Festival and former Chairman of the Vaughan Williams Society, discuss the delights of this rarely performed seasonal work.