The Guardian: The Booker Shortlist

‘I’ve no idea how we’ll pick a winner’: the challenge of a spectacular Booker shortlist 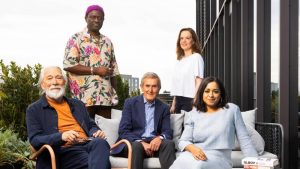 Legend has it that the 1976 Booker prize was decided by a coin toss when the exasperated judges were unable to agree on a winner. I’m not suggesting that this year’s chair of judges, art historian and former museum director Neil MacGregor, keep some loose change in his back pocket, but every book on the 2022 shortlist is a serious contender for the prize. Short of coin-tossing, arm-wrestling and plucking a name from a hat in a blind panic, I’ve no idea how we’ll pick a winning book from this spectacular final six.

In alphabetical order, the 2022 shortlist begins with NoViolet Bulawayo and her fabulist animal allegory, Glory: a furious, funny and energetic story set in the fictional animal kingdom of Jidada (read: Zimbabwe) as it surfaces from decades of dictatorship. Bulawayo captures the hope, dismay and disarray that follows the toppling of a tyrant. The animal cast includes Robert Mugabe as a doddery old horse and Donald Trump as a tweeting baboon. Bulawayo writes with an exhilarating anger and her surreal imagination puts the Dada into Jidada. It’s been touted as a Zimbabwean Animal Farm, but Glory equally draws from a rich tradition of African storytelling in which animals articulate the deepest truths of our societies.

If you’re looking for the wittiest book of the list, it might be The Trees by Percival Everett: a morbidly funny and semi-supernatural thriller in the southern gothic style. When a small town in Mississippi is rocked by a series of gruesome murders, two black detectives are tasked with solving the crimes and contending with the racist locals. Their deadpan dialogue punctures an otherwise unbearably febrile atmosphere, heavy with the history of racial violence. As the body count rises, the town must reckon with its past – specifically the lynching of 14-year-old Emmett Till, 65 years earlier. Here, crime fiction meets brutal reality to profound effect. Everett understands how the memory of Till haunts the American conscience. In The Trees, he asks what justice is and whether it can ever be done.

Cheshire-born novelist Alan Garner apparently needed “a lie down” when his publisher called with the news that Treacle Walker had made the Booker longlist. We hope he has a sofa nearby for the shortlist announcement. Perhaps the most mysterious of the final six, Treacle Walker is a mercurial read, puzzling and poignant. An introspective youngster called Joe with a lazy eye and a love of comics (the story is sprinkled with yelps of “OOF! ZONK! KER-POW! SPLAT!”)meets the enigmatic Treacle Walker. Outwardly a simple rag-and-bone man, he’s really a healer, a shaman and a guide who’ll grant Joe a glimpse into another realm. Impossibly tender, a little bit weird, entirely Garner.

Shehan Karunatilaka’s The Seven Moons of Maali Almeida is partly set in a civil war-stricken Sri Lanka and partly in an idiosyncratic afterlife where celestial bureaucrats process new arrivals. War photographer Maali Almeida is dead and he has seven nights (or “moons”) to work out why. He’ll also need to guide his friends to a hidden cache of photos. It’s a political thriller, a gorgeous gay love story and an altogether sprawling novel of tremendous imagination and verve, compulsively told. You’ll read it and think of Rushdie’s Midnight’s Children, or Martel’s Life of Pi, but The Seven Moons of Maali Almeida is a world of its own.

Claire Keegan’s Small Things Like These might be one of the most concise book ever to be shortlisted for the Booker, but don’t let that deceive you. It’s a novel of serious weight and gravity, dedicated to the unmarried mothers and children incarcerated in Ireland’s Magdalene laundries. Born in 1946 to a single mother, coal merchant Bill Furlong is a married father of five: an unobtrusive, thoughtful man. When a startling encounter at the local convent awakens him to the hypocrisy of the church and the complicity of his community, Keegan makes him our moral compass in a story that glistens like a finely cut gem, growing in clarity with every read. Not a word wasted.

And finally, Oh William! by Elizabeth Strout. Although it’s the third in the novelist’s Amgash series featuring her heroine Lucy Barton, don’t worry if you haven’t read the previous two. “I feel myself getting better with each story,” she said recently. No one writes interior life as Strout does, and enveloped by her prose, we become Lucy: a writer in late middle-age, negotiating old marriages and new grief, and all the while struggling both to escape her childhood and confront what it has done to her. She is one of literature’s immortal characters – damaged, vulnerable and most of all, ordinary, like us all. This is meticulously observed writing, full of feeling and insight – just piercingly good. You could say, “we love Lucy”.

The winner of the Booker prize 2022 will be announced on 17 October. The judges will not be tossing coins, just reading the very best fiction writing of the year. We hope you will too.