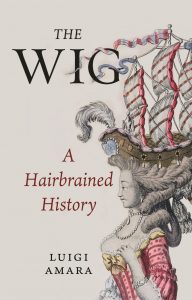 In 1990 Andre Agassi, the American tennis player and legendary wearer of bandanas, lost the French Open Final to Andrés Gómez from Ecuador. Some say Gómez got lucky. The night before the final, the mullet-haired Agassi had washed his wig with the wrong conditioner and found it falling apart in his hands. He called his brother in a panic and somehow managed to piece the wretched thing together with pins. Tying his electric pink bandana with additional vigour the next day, Agassi stepped onto the court praying not for victory but for his wig to stay in place. It is a wonder he only lost 3 sets to 1.

This is one of many anecdotes in Luigi Amara’s The Wig: A hairbrained history, translated by Christina MacSweeney and published by Reaktion Books, a press that has developed a line in cultural histories of unusual things, handsomely illustrated and populated with curious detail (see forthcoming books on raccoons and jelly). The reader may find that all objects, when inspected in this way, display a wider cultural resonance. The real question, then, is whether that resonance is as important as the writer believes. Amara makes some ambitious claims. Perhaps the hyperbole is partly an unfortunate effect of the translation, but he declares, off the bat, that wigs should be our “sidereal representative … a cosmic calling card”; in other words, the object that we shoot into space to allow aliens to understand the meaning of life on Earth. “I like to imagine the amazement of some extraterrestrial being holding in its hands … that light, crouching mat of hair that … speaks of a hirsute, stylized world where nothing is what it seems.”

More persuasive is the modest assertion that the wig is an object around which notions of identity, gender and the body are formed. Amara gathers miscellaneous examples – from the 400 wigs owned by Emperor Claudius’s wife Messalina, who would don them as a disguise during sexy night-time escapades, to Descartes who thought that wigs were somehow beneficial for health and had at least four. There is also Andy Warhol’s platinum blonde pageboy-style wig, which sold for $10,800 at Christies in 2006, and the Belgian fashion designer Martin Margiela, who made wigs with matching jackets for his Spring/Summer 2018 collection. All of which makes for an interesting and enjoyable study, though it is a bit of a tangle.