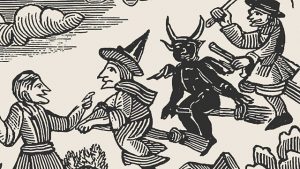 The devil’s daughter features in a new novel from Jenni Fagan. Salena Godden’s imagines Mrs Death. They join Shahidha Bari alongside a pair of historians – Tabitha Stanmore researches magic from early modern Royal Courts to village life and Daniel Ogden has looked at werewolf tales in Ancient Greece and Rome.

Jenni Fagan’s latest novel is called Luckenbooth. Her first book the Panopticon has been filmed. Fagan was listed by Granta as one of the 2013 Granta Best of Young British Novelists. There is more information about her drama and poetry collection There’s a Witch in the Word Machine https://jennifagan.com/

Salena Godden’s novel is called Mrs Death Misses Death and it’s published on 28 January 2021. She’s been made a new Fellow of the Royal Literature Society. You can find more about her poetry and her radio show Roaring 20s http://www.salenagodden.co.uk/

Tabitha Stanmore is an Honorary Research Fellow at the University of Bristol working on witchcraft.

Daniel Ogden is Professor of Ancient History at University of Exeter. His book is called The Werewolf in the Ancient World.