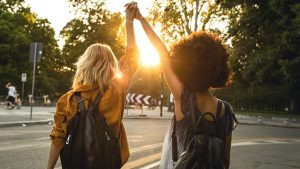 Aethelflaed and Bertha are two of the figures discussed in the new history of women in the Middle Ages written by Janina Ramirez. Choreographer Shobana Jeyasingh has taken the heroine who fights Tancredi the crusading knight and reframed the story set to the music composed by Monteverdi’s Il Combattimento. Cat Jarman is a bioarchaeologist who has tracked the way a Viking ‘Carnelian’ bead travelled to England from eighth-century Baghdad, with all that it tells us about women and power.

They join Shahidha Bari to discuss ideas about women as warriors and power brokers.

Femina: A New History of the Middle Ages, Through the Women Written Out of It by Janina Ramirez is published July 21st 2022

River Kings: A New History of the Vikings from Scandinavia to the Silk Roads by Cat Jarman is out now.